Know your preferred courses?Build Your Own Golf Vacation

Starting from $234 per golfer per night (Low Season) 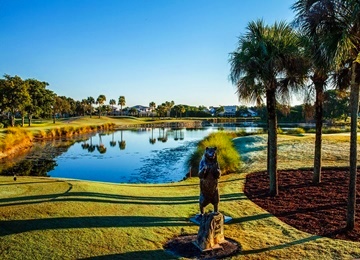 3 rounds of golf per night stay

Starting from $251 per golfer per night (Low Season) 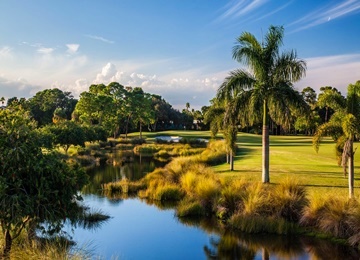 4 rounds of golf per night stay

Can anyone play PGA National?

If by “anyone” it is understood any person that stops by the resort and inquires the front desk about tee time, the answer is no.

All of the five courses hosted by the PGA National Resort and Spa are private, reserved for PGA Resort guests, PGA Club members, and their associates, but for the general public, golfers must be guests of the resort.

The details of how you get to play on PGA National

The price for lodgings at PGA National is not prohibitively high, with it varying by season. Resort fees are included in the package price, which includes the following amenities:

What golf course has the Bear Trap?

The famous (or infamous, depending on your attitude towards extreme challenges) bear trap is a three-hole stretch at the end of the Champion Course at the PGA National Resort in Palm Beach. It consists of holes 15 – 3 par, 16 – 4 par, and 17 – 3 par and is the brainchild of non-other than Jack Nicklaus. At the 2011 PGA Tour’s Honda Classic the small stretch of course claimed no less than 150 balls, with numbers 15 and 17 requiring 60 and 65 respectively, while 16 settling for a more modest 25. This was a record.

Jack Nicklaus had this to say about his devilish creation: "It’s not about length. It’s about precision. It’s about guts. It’s about what do you have in your chest that you can finish those holes." What guts have to do with precision is beyond us, but one thing is certain: the bear trap is the most difficult area on anySouth Florida golf course.

When first opening up in 1981, the Champion bore the signature of George Fazio but was entirely redesigned in 1990 by Nicklaus.

Surprisingly enough, the course starts nice and easy, with the first five holes reported to be a breeze. At number 6 however, a mighty par-5 (par 4 in the Honda Classic) things start to get tough. This is placed on a thin stretch of green, between two bunkers. Another highlight is hole 11 situated dangerously close to a pond.

Where is the PGA National Resort & Spa the Champion course?

Most of us won’t need directions to the PGA National resort since there are plenty of taxis around nearby airports. However, if your rental is waiting for you at the airport these are the paths you should follow.

From Palm Beach International: Go east on Turnage Boulevard until you reach the ramp to West Palm Beach. Take the ramp into I-95 and follow the road all the way to exit 79B. This will get you on PGA Boulevard (SR-786 W). When you reach Fairway Drive, turn left. There is a traffic circle (roundabout) where you should take the second exit to Avenue of Champions. The resort is at 400 Avenue of Champions.

From Miami International: Head due west and turn left when you see the signs for High Vehicle/Parking & exit. Take the ramp to I-95 N/Beaches into Airport Expy/SR-112. Drive on the 112 until you reach the exit into I-95/SR-9A towards Orlando. At Florida’s FTN make a slight left following the signs for FTN and SR-826 W. Take exit 109 for Palm Beach Gardens and follow right at the fork. You should follow the signs for SR-786 W/SR-710/PGA National into PGA Boulevard/SR-786 West. When you reach Avenue of Champions, turn left.

How many acres is PGA National?

The PGA National resort extends over 2,000 acres and has dozens of sporting facilities and four golf courses on-site (a fifth one is just a short five miles drive away).

The most famous of these is the Champion. Designed by Jack Nicklaus, it covers 7045 yards, has 18 holes and a par of 72. Near its end, there is the dreaded bear trap, between holes 15 and 17.

PGA National’s Palmer Course has an equally challenging close: A 5-par placed on an elevated green and guarded left and right by obstacles. It’s only slightly bigger than the Champion at 7079 yards.

The 7050 yards Fazio course bears the signatures of Tom and George Fazio. It has 18 holes with a slope rating of 139 and a USGA rating of 74 and a half. It was first opened in 1980 and can accommodate players of various skill levels.

Tom Fazio’s Squire course was opened just a year later. It is relatively large at 6447 yards and has a slope rating of 140. The USGA rating is 72.1 and the course features 4 sets of tees for players of different skill levels. Like most courses at PGA, it features Bermuda grass. It is currently closed for renovations.

Some five miles west of the resort you will find Karl Litten’s Estates course. It has a USGA rating of 73.1 and a slope of 134. It features five sets of tees and has 18 holes. The greens are Bermuda grass.